The operating mass flow meter working principle is basic but very effective. This phenomenon is all around us in the physical world; for example the earth’s rotation and its effect on the weather.

A coriolis type flow meter contains a tube which is energized by a fixed vibration. When a fluid (gas or liquid) passes through this tube the mass flow momentum will cause a change in the tube vibration, the tube will twist resulting in a phase shift. This phase shift can be measured and a linear output derived proportional to flow.

Mass flow meters are the types of flow meters which are mainly employed in mass-related processes such as chemical reactions, heat transfer, etc. In all these processes, accurate measurement of flow is the prerequisite.

A Coriolis meter works on Coriolis Effect, hence it is named so. Coriolis meters are considered to be true mass meters since they tend to measure the mass rate of flow directly while other flow meter technologies measure volumetric flow.

Since mass does not change, no adjustments are needed for varying fluid characteristics. Hence, a Coriolis meter operates in linear fashion.

When a fluid is flowing in a pipe and it is subjected to Coriolis acceleration through the mechanical introduction of apparent rotation into the pipe, the amount of deflecting force generated by the Coriolis inertial effect will be a function of the mass flow rate of the fluid. If a pipe is rotated around a point while liquid is flowing through it (toward or away from the center of rotation), that fluid will generate an inertial force (acting on the pipe) that will be at right angles to the direction of the flow.

How does a Coriolis flow meter work?

Coriolis flow meter working principle is based on the Coriolis Effect. In nutshell, the Coriolis force is one of the forces of inertia that affect tube oscillations.

When work starts the drive begins to push the tube. Hence, it starts to fluctuate with a certain frequency. The sensors are located on the two sides and record current vibration parameters (without flow).

When the tube is not filled, both ends oscillate in the same phase. On the graph of frequency oscillations, the sinusoidal at the input will be equal to the parameters at the output.

Tracking the fluctuation's frequency is the main part of the measurement. When a substance, such as a liquid, begins to move through the pipes, the tube experiences additional distortions in frequency due to the inertia of the flow. It happens because the flow interacts with pipe walls. The results may be strongly affected by external vibration. If it cannot be avoided you can use ultrasonic flow meter.

Due to the appearance of additional effects on the walls, the inlet and outlet of the tube starts to vibrate in different phases. Now their sinusoidal oscillations will have a difference in the form of a small shift between them. 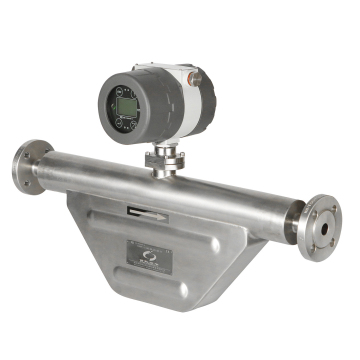 Coriolis flow meter principle of operation allows working with a wide variety of mediums. The devices can work with contaminated media because the sensors are not in contact with the flow. Coriolis type mass flow meter is commonly used to work with the following substances:

Such coriolis flow meter density measurement is even capable to measure slurry materials.

After considering the flow sensor design and its principle of work, let’s look at main advantages and disadvantages of such device.

Advantages of a Coriolis flow meter:

No dependence on flow direction

In general, these types of transducers represent a simple and effective way to measure flow parameters in pipelines. However, they need stable physical conditions for operation.