1. The choice of coriolis mass flow meter installation location should avoid electromagnetic interference. The installation positions of sensors and transmitters and the laying of cables should be kept away from equipment that is prone to strong electromagnetic fields, such as high-power motors, transformer facilities, and frequency conversion equipment.

3. The mass flow meter is a flow meter measured according to the vibration principle of the measuring tube. Therefore, when installing the sensor, it should be considered to make a solid support near the flange of the process pipeline on both sides (about 2 to 10 times the diameter of the pipe) to avoid the meter and the Vibration occurs in the associated piping. If strong piping vibration is unavoidable, it is recommended to isolate the piping system from the instrument sensor with a flexible pipe.

5. During installation, the connecting flange surfaces should be parallel to each other, and the centers of the two flanges should be located on the same axis to avoid additional stress. It is strictly forbidden to use the sensor to straighten the upstream and downstream process pipes, otherwise it will affect the measurement or even damage the sensor.

6. On the upstream and downstream pipelines of the sensor, it is recommended to install stop valves and bypasses to facilitate zero adjustment, daily maintenance and to ensure that the sensor can be in a full pipeline state when it is not working. Mass flow meters used in custody transfer applications do not need to be bypassed. Flow control is performed using a regulating valve downstream of the flow meter.

7. The installation direction of the sensor should ensure that the measured medium can completely fill the sensor. Do not collect gas for liquids. For gas or not to accumulate liquid, for viscous, dirty, high freezing point media, it should be easy to empty (according to needs, low-point valves can also be installed on both sides).

8. For newly installed pipelines or pipelines that have not been used for a long time and have just been used, the entire pipeline (especially the upstream pipeline) needs to be purged before the coriolis mass flow meter is installed to ensure that no welding slag or debris remains in the pipeline. 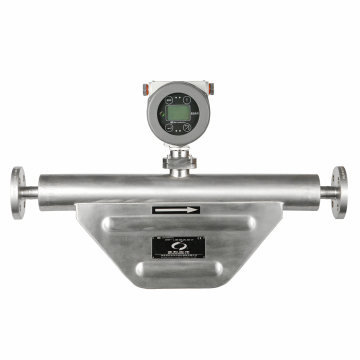 What problems will you encounter when installing a mass flow meter?

1. The mass flow meter should be installed on the pipeline that is completely filled with the measured medium.

3. When used to measure volatile liquids (such as light hydrocarbons, liquefied gas, etc.), the pressure at the outlet of the flow meter should be higher than the saturated vapor pressure of the liquid; the flowmeter should not be installed on the pump inlet pipeline; when installed in a vertical pipeline When it is installed, it should be installed at the lower part of the pipeline.

4. The installation of the Ω-tube mass flowmeter on the horizontal pipeline shall meet the following requirements:

a) When measuring gas, the Q-tube should be placed above the pipeline;

b) When measuring liquids, the 0-type pipe should be placed under the pipe.

6. Mass flowmeters with a diameter greater than or equal to 80mm should be supported.

7. When the measured liquid may contain gas, a degasser should be added.

8. The coriolis type mass flow meter should be equipped with front and rear shut-off valves and bypass valves.