Through careful research and analysis, a new type of instrument based on the principle of heat conduction effect has entered our line of sight. This instrument is the thermal mass flow meter. Although it is a new type of instrument, its measurement principle was proposed early in the 20th century. In the 1980s, heat conduction technology has been used in the measurement of gas mass flow in some developed countries. However, due to the limitation of microelectronics technology, thermal gas mass flow meters had many defects at that time, such as slow response speed and easy interference, all of which were only used for small flow monitoring in some special occasions, or used as flow switches.

After entering the 21st century, with the rapid development of microelectronics and computer technology, the bottleneck that restricted thermal gas flow meters in the past no longer exists, and the calculation speed, accuracy, and anti-interference ability have been greatly improved, and thermal gas mass flow meter technology has been improved. With rapid development, it has been widely used in petroleum, chemical, iron and steel metallurgy, electric power, light industry, medicine, environmental protection and other industries. 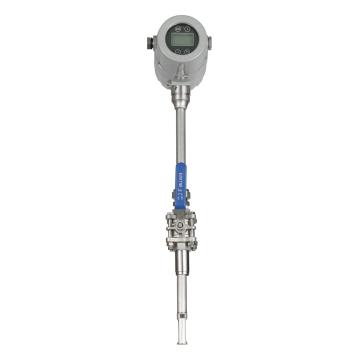 Thermal gas mass flow meters have a variety of implementation forms according to different heat transfer methods and heating methods. At present, there are two commonly used types: constant temperature difference type and constant power type. Both methods require 2 thermal elements as sensors, and are matched with corresponding control and calculation circuits, as well as processors and heaters.